The first verified documentation of the St. Maurice church dates back to 1257 when its vicar, Fridrich, was mentioned as a witness in a list of Bruno, who served as the Bishop at the time. Therefore, some historians claimed that the church had been built from scratch for the local bourgeoisie during this time. Although St. Maurice was Bishop Bruno’s favourite saint which would support this idea, in fact the sacred building had existed at this location even before.

As of today, we know for certain that unlike other medieval towns, Olomouc was not founded without prior planning. Due to its complicated floorplan and existence of churches with parish rights (the St. Maurice, the St. Blaise) one could expect that the town is composed of several settlements with its origins dating back to the Slavic era. These settlements were then legally connected into a municipality district ca between 1220–1250 by the order of the king. According to Olomouc historiography, a part of bishop’s land including the surroundings of St. Maurice church were exchanged for the right of toll collection in Vyškov as confirmed by king Wenceslaus I in 1248. However, the right of patronage (ius patronatus) was held by the Olomouc capital until 7th July 1933. 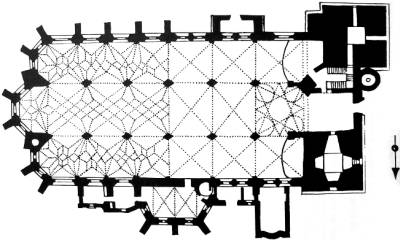 If we embrace the idea that the transaction included the St. Maurice church, then there could bemore historical sources related to St. Maurice – for example a possible exchange of the St. Maurice church and its surroundings for churches dedicated to the St. Stephanus and the St. Michael in the nearby Hradiště Abbey executed by Abbot Bohumil (1127–1149) and Bishop Zdík. In the light of these events, the exchange from 1248 could seem even more likely to be true. Some of the archaeological research conducted in the St. Maurice area answered some other questions related to the possible Romanesque origins of the church. A field survey, conducted in 1973 and 1978/9 as a part of a nearby department store construction, led to a rejection of all previous theories about the terrain being originally a swamp area. On the contrary, it showed that the St. Maurice is situated on a miniscule and propitious hillock which caught the eye our ancestors to settle down as far back as the New Stone Age (4000 BCE).

One of the major findings was related to a Slavic village from around 1000 CE with evidence of blacksmiths. The same case was confirmed eastly from the church at the corner of Pekařská and Zámečnická street (today, the Koruna department store). Aside from substantial evidence of a prehistoric settlement, the 1982–1984 research confirmed existence of an early Slavic settlement with a so-called Prague-Korchak pottery (6th century) which changed its character with time and acquired its town-like features. Extensive findings in this area were related to trade and potentially marketplace meant both for local and exotic exchange (silver denarii from 10–12th century, Baltic amber, Indian carnelian,…). Quite surprisingly, an unknown burial ground with 13 graves from the Great Moravian Empire era was uncovered here as well. There is no clear connection between this burial ground and the church alone, however, many findings of S-shaped earrings (typical for Slavic women) prove the fact that the surroundings of the St. Maurice were used for burying as early as in 12th century. Together with other pieces of evidence (fragments of terracotta tiles for instance), this proves the existence of the church as it served its fundamental parish rights on the marketplace. Without a revised research, it is impossible to decide whether the architectural findings from 1970s are related to the possible existence of a nobleman residence in this place as the exploration in 1973 was prematurely terminated due to a state intervention. 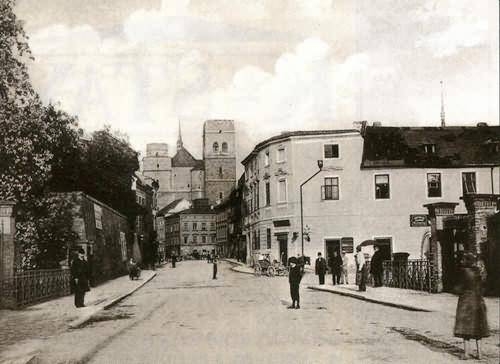 At the Maurice square, which served as a cemetery until 1784, a few cemetery chapels were situated. During archaeological research, many architectural finds were discovered including the floorplan of the “Czech chapel” of St. Cyril and Methodius (documented in 1452) possibly dating back to the 13th century.

The construction of the church

St. Maurice was a leader of a Roman Theban Legion. Together with Exsuperius and Candidus, his closest military leaders they served as an example in both military discipline and faith and love for Jesus Christ. As Maximian, the Roman emperor and co-emperor to Diocletian, ordered his army to celebrate a service for Roman gods, the Theban Legion led by St. Maurice disobeyed his order. In their letter to Maximian, soldiers stated that even though they listened to their emperor in military matters, they were Christians and therefore refused to serve pagan idols.

As a punishment, Maximian had every tenth soldier of the Theban unit slaughtered, but the remaining soldiers stood for their belief. As a result, Maximian ordered to decimate the rest of the legion. Without fighting back and reconciled with their fate, St. Maurice and his fellow warriors (ca 6.600 men) were killed in 286 CE in the Wallis canton (today’s Switzerland).

The cult of St. Maurice and other Theban martyrs soon spread into Switzerland, Italy and France with over 500 churches and over 200 towns and villages carrying the name of this saint to this day.